My dad hasn't been out of bed for two years. That is except for the birthday dinners that the nursing home has thrown for the residents who've had a birthday during the month. Then he dresses and gets rolled down to the dining room for dinner, cake and ice cream. Only, he rarely eats, and doesn't talk about much either.  Almost every time I visit him I leave crying and  committed to visiting him more often.

My dad has never talked much. He loves the treats we bring and the high-fives when we leave. The gap between the two is probably fifteen minutes. That's all any of us can tolerate.We are always so excited when there's a tidbit of news to share that can chase away the awkward silence.

So I wonder what makes me sad?

I'm pretty sure it's memories.


I'm not so naive that I didn't know that there was gossip about my dad. That he didn't pay his bills like he should have, that he was a dreamer thinking the next job would be the ONE, and that he liked pretty women. Sometimes that hurt knowing that other people were looking at him, silently criticizing him. My hero.
There's a reason I look at him as my hero.

He loved me. He made me feel pretty. He acknowledged me when I walked in the room. "Hey Bets!" or "Hi Honey!". Such simple things to do. But they made a difference in my life. He'd wake me up at four in the morning to go lobstering or fishing. We never talked much. He didn't ask about my life or my dreams. But we shared time together. That was enough. And he never ruined that time we spent together. He never tried to teach me anything. And he never criticized me. He told me I was good luck for him because, he said, we always caught a lot of fish together. He taught me to carry them by their gills. We'd usually give our catch away to his friends at George Wests' Market on the way home. I don't remember ever keeping any. He was always so generous. Actually, I think he needed to stop in and talk, so he gave them fish when he had them. I loved those times fishing with him!


When he wasn't sitting tucked into the corner of the living room couch with the latest novel or newspaper, he was either at work, working on the house or garden, or playing with us in the back yard or the beach.

He would take us to the beach during an approaching thunderstorm. Such a rebellious thing for a dad to do because ...well...lightning...over water. Not the best mix some would caution! My mom was a little worried. But my dad never worried openly about anything. Maybe he did worry. Now I know that adults can hide worry very well. He just never gave me that impression. Getting into the car, all sandy because one of my brothers had kicked sand in my face (an accident he claimed), my dad just told me not to make a big deal out of it. He said it with a little hug as he wiped the sand off and hustled us into our seats. Times like that annoyed me. I just wanted him to punish someone for something! But he never did.

Free time with him was spent playing ball in the back yard. Sometimes we had a cookout. Mostly he took us to visit his friends. Some of them had kids. There was always food and beer. One cookout got a little crazy and toasting marshmallows escalated into a marshmallow fight. Shocked when one landed in my hair, my friend and I ran back to my house to get it out. When everything we tried failed, we cut the patch of hair down to the scalp. We HAD to get back to the party! I knew I was in trouble when my friend couldn't stop laughing. What were my parents going to think? It took two days for them to notice it. We were cooking out again and I stood near them on purpose, bent over the grill so that they couldn't miss it. The suspense was hard. My mother saw it first. She almost fainted as she gasped "Ohhhhh!". "What's wrong?" asked my dad. When he saw what she was pointing at with her free hand he laughed. Did he take ANYTHING seriously? I expected so much more. But that was the end of it.


When my baby brother died things changed. Death can make a difficult life really hard. I've found it rarely makes things better. My parents divorced around that time, and life as I'd known it ended. I sat on the front porch telling one of my friends that something REALLY bad had happened. "Did someone die?" she asked. "Worse," I said. " When I told her about the divorce I meant it. It was worse than someone dying. I was so upset and felt so helpless. I sobbed uncontrollably to my mother as she sat on my bed, tucking me in for the night. I was so desperate to have her feel my pain because I knew if she could feel what their decision was doing to my insides she'd stay with my dad. But that didn't happen. It was all matter-of fact living from that day forward. I saw him on weekends and half of each holiday day. My dad became the fun one, the one who'd buy us treats and take us on trips camping. But I missed the normalcy of having him living with us, his bedroom down the hall from mine. I missed the nightly backrubs which ended with at least two of us kids rubbing his back,waiting for the "beep" which was the signal to stop. I waited forever for the signal. He'd almost always fall asleep


When he started shipping out on oil tankers I wouldn't see him for months at a time. But he'd call ship-to-shore sometimes. I was in college when I'd get a random call from him wishing me a happy birthday or just to say hello and that he missed me. Those calls meant everything to me. Because he was my dad. No other reason. I loved hearing his voice and knowing that he'd followed through with a thought about me with a phone call.


He called me often after I got married and when we moved to Maine. I hung up on him one day, two times in a row, when his speech was slurred and I thought he'd been drinking. He was actually having mini strokes which culminated in another larger one which paralyzed him on his left side. He took care of himself for years, relying heavily on my sister until she died in 2005. Two years later he started the nursing home period of his life. Which brings me back to the present. 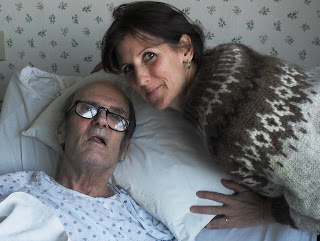 I will always claim that I believe I was given the best father in the world. I don't feel like my relationship with him lacked anything. I think that's because I always knew he was doing the best that he could. He gave me a foundation of love that I stand on often. Love was expressed simply. He taught me to laugh and to forgive. He showed me by example that worry gets you nowhere, and that things always work out. I feel grateful for the sweet spirit that he is. I have dreams of him in which he's whole, emotionally and physically. I like those dreams.

So, I'll continue to visit him, and yes, I'll still cry when it's time to say goodbye. But I know a little better now that those tears are triggered by the wonderful memories I had of him in my childhood. They are not tears of regret of what might have been. What I was given was enough. And I feel rich.