Stuff: A Window to Their Soul

I was picking up stuff again this morning as everyone got ready for their day. I was starting to feel the frustration build, repeating what I've done for the past 25 years, every day, when I noticed a different thought trying to creep in through my cluttered brain. Isn't it all of this stuff that lets me know who my kids are? Evidence that they've been here? And what about my ancestors? Isn't that what I'm desperate to find to enrich their personal stories? But most of their stuff died with them. Just a thought. And I thought of this post I'd written last winter. Just think about your ancestors when you read it and how helpful it would be to get a glimpse through the windows of their homes to all of their stuff! The stuff that made them feel comfortable, important enough, and like life was good just the way it was.

Connor, almost three years old, stood in the doorway to my bedroom, arms outstretched, head tilted with a quizzical grin on his face. He was covered head to toe in shaving cream. I said, "Honey! You have to stop getting into people's stuff!" He shrugged and said, "But I don't have any stuff!" A month later, for his birthday, we gave him a big wicker trunk with a hinged lid full of his own "stuff". Just little things in his own box that he could go to when he wanted.

I love that word. Stuff.

One dictionary gives two definitions that seem to contradict each other, or at the very least could be from two different points of view:


Obviously this refers to MY  stuff.


Just as clear to me as a mother who wants order in my house, this refers to all YOUR stuff!


It has been very challenging to manage all the stuff that nine children and two adults can collect. I look at the coats and shoes, scarves, mittens and hats and realize that most of what I don't like about winter is all the clutter. I've become a master of cleaning out extras and giving them away. I can't stand having anything stored either. Clutters my brain.


But that's where the conflict comes. What I consider extra and unnecessary you can't live without. I would just as soon live in a tent and be a nomad because then I could wake up to live. Since I'm the only one in the family who likes simplicity, I wake up to manage all the stuff in the house. I'd rather wake up and draw or go for a walk. But when you have stuff you are responsible for and to it. The way I care for my things shows gratitude. So, knowing I can only balance so much, I'm pretty careful about what I let into my house.


The Absolutely Won't Work In My House List includes but is not exclusive to: marbles, Legos, and board games or anything that has a lot of parts or pieces. My children go to their friends' houses to play with their toys!


It's not that I haven't felt attached to stuff myself. But the older I get the easier it gets to see what's keeping me from doing what matters most.


As a child I collected things that other people would throw away because I felt sorry for those things being unloved. Gum wrappers, black licorice, black gum drops, black jelly beans...the list goes on. We all have reasons for collecting. Most of the stuff we have elicits memories of a person or time of value. Now I can make a clean sweep of a room and know instantly what's just collecting dust. And I no longer feel attachment of any kind to the material thing because I have a memory of it somewhere in my brain. A snapshot.


I've come to love doors. Doors that I can close to a room that holds all the stuff that seems like trash to me. I know what's behind those doors. But by closing it I make everything behind it your responsibility. What's funny is that periodically the person living in the room goes through the room purging and cleaning and sees and enjoys their space differently...for a while.

I heard an organization expert say yesterday (paraphrased), "Without exception, when the living room is cleared of all the stuff and clutter, children come in and dance."
So I have some stuff that enriches  my life. Art supplies, some hard cover books, a copper collection that shines in the sunlight, as well as  journals and family history. For now that's all I can think of.


And last week I caught my 5-yr. old dancing in my living room! So...I'm getting close. 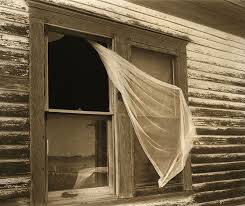 I would love to know what enriched my ancestors' lives. Were they pack-rats? Neat freaks? Collectors? Did their mothers sigh under their breath every day, picking up the evidence that they left behind that they'd been there...and were no more?
Posted by Unknown at 12:59 PM