It's 4:30 am, Thursday morning. I put my head in my hands and decide I need some divine intervention.

I have followed every lead to find Frederick Lester Lowrie, always hitting the same brick wall. He's Olga's husband, and Roy, Vic, Lester, and Madeleine's dad. His document trail runs dry after his 1901 marriage in London where his father and step-father are witnesses.

In my last post I found him living in France from 1926-1930. I want to know where he went in the years in between and after. I'd also like to find out when and where he died.

It would be fun  to be able to tell my mom a little bit more about her maternal grandfather. That means so much to me. That's why I persist in the pursuit of this mysterious family when I've thought for years there wasn't enough information to get me anywhere.

Who can argue with fires, and lost trunks full of family documents? I have believed that there was no use looking for something or someone dead and gone.

For two days I have set my mind to finding these people and I've been generously rewarded for my tenacity.


I had nothing new to look at today. But when all else fails I start at the beginning and review what I have.

I randomly chose to look more closely at his mom, Madeline, and his dad, James and what the family looked like in the 1881 census. Madeline, (still listed as married), his sister, Stella and Frederick are there, but no James.
Great! Another father missing-in-action!

Then in the 1891 census Madeline's mother joins the fatherless family. Both women are described as "widowed". So James is dead?

That same year, 1891, after the census is taken, sometime in July, Madeline dies leaving Frederick and Stella motherless. I was shocked! But such is life. People die.

Now I have new questions. Where did Frederick and Stella go? Did they stay with Grandma? No. And they are nowhere to be found!

I learned all this in under 2 minutes.

I know they're all dead now, but I just wanted to be sure that Frederick and Stella were okay.

Then, as I sat in the quiet I heard a thought I'd ignored for at least 10 years. "Look at Olga's photo again. Look at the signature."

How many times had my mother told me that there might be a clue in that name? Countless. Do you remember that picture? The one from "My Family History/"Booger Snots!"? 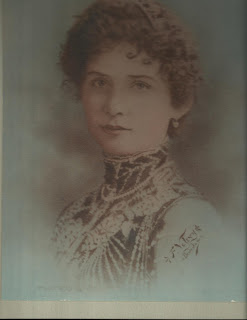 This picture was holding a clue to Frederick's whereabouts for him from the time his mother died in 1891 until 1906.
The name written across Olga's left shoulder is "Valery".
Stay tuned!
I save some documents, write some notes and look at the clock. It's nearing 5am. Do I check emails, read a blog or two? Clean the house? Only one more hour before I have to wake the kids up for school. I choose to keep searching.
Posted by Unknown at 8:07 PM