The What Not Inn 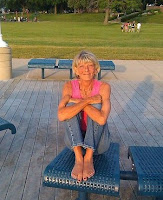 When Betsy asked me to write a guest post on her blog, she had me shaking in my snow boots.  Me?  Write?  On someone’s blog?  A formal type writer I am not.


However, what she asked me to write about was easy:  My Grandparents or someone earlier.

[Ann admitted to me that when the temperature hits 50* she's outdoors painting, so her blog, Willy Nilly, This and That might be all about her artwork! (hint, Ann!)]

Lucky me!  I knew my Great grandparents on my Mom's side.  We spent many a Sunday afternoon piling in my Grandpa’s big old Buick and taking a mini road trip to the “What Not Inn.”

The first I remember being there I was probably five years old because my brother was a baby and for some reason he cried all the way there.  Kind of unforgettable in a car with 6 people and a 30 mile ride.  It seems like a forever ride to a five year old anyway.  But what fun it was to finally get there.

I was named after Anna, my Great Grandma.  I always thought that was kind of cool and she and my Great Grampa John were quite the characters, running that Inn from the 1920's until the late 1950's.  The Inn was located just South of the Resort towns of Saugatuck, Douglas and Holland, on the main and, at that time only, road North along the Lakeshore of Lake Michigan between Chicago and points North.  Back then it was almost exclusively Chicago people who had Summer Homes on the Lake, the most famous being Al Capone.  Some interesting people passed through and came to eat at the Inn and spend the night in the cabins.

Back then, I was the youngest mobile child at these family Sunday and Holiday get togethers.  The older kids could wander and play in the Orchard or on the bridge over the Koi Pond but being the Wee One as he called me, my Gramps seemed to be my playmate.  He was a combination magician, artist and someone who just knew how to be a kid himself.  The old man had a huge bushy white mustache and a shock of unruly white hair and he always wore some kind of straw hat or Beret to hold it down.

Oh boy could he tickle a little kid with that "stache"!

Gramps thrilled all the kids with the Quarter appearing out of your ear trick and a Quarter was a lot of goodies at the corner store for kids in those days. The boys would tuck theirs in their pants pocket but for us girls still in our Sunday Best dresses, Gram would get a handmade lace edged handkerchief and make a knotted pouch and tie it around our wrist. She seemed to have a never ending supply of these handkerchiefs in her apron pockets for some reason.

Gramps was never without a pencil tucked over his ear and a pad of paper stuffed in a pocket.  The man could sketch and draw anything you asked him to.  THAT was my greatest fascination: to see lines turn into an animal and the animal into a scene out of his head.  He must have done hundreds for me in the short 5 years that I was lucky to have time to spend with him.

I’m sorry to say I didn’t inherit his drawing talent -- but it sure hasn’t been for a lack of trying over the years!

My Great Gramma Anna sold the restaurant part of the Inn after he died but she still ran the 8 little cabins behind the house.  Somehow it just wasn't the same going to visit after he passed, maybe because I was older and there were younger kids and I could play with the big kids.  There was a very big presence, at least for me, that was missing.

The What Not Inn is still there today and has been remodeled and expanded over the years to a Bar and full service restaurant.  There is this Awesome wall as you come in the door with photographs from the day it was built to the present and local area photos, with my Great Gramps in almost every one of the old original ones -- along with a few infamous guests that spent their Summers on the Shore.

I think I should go visit that place again.   This time, I think take my camera and see if I can recapture some memories.

Some fun posts of Jane's: